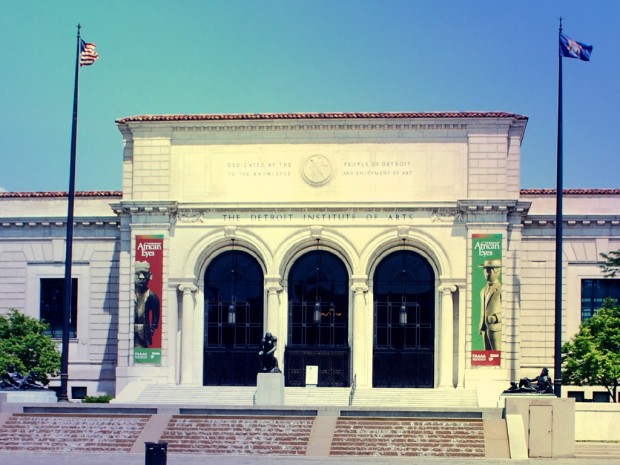 The Detroit Institute of Arts

The Detroit Institute of Arts has often been described as an encyclopedic art museum. With over 65 thousand works in 100+ galleries spanning time and space from ancient Egypt to contemporary America, this is a moniker well deserved.

The museum, oddly enough, began as a series of newspaper articles cataloging a tour of Europe and its art, undertaken by The Detroit News founder James E. Scripps and his family. The articles led to an art exhibit organized by the paper in 1883. It was decided that the city needed a permanent museum, and with the support of numerous prominent Detroit citizens, the Institute, known at the time as the Detroit Museum of Art, opened on the first of September, 1888.

The current building was constructed in the 1920s, designed by architect Paul Philippe Cret in an Italian Renaissance style, replacing the Romanesque original. The visitor enters the central court flanked on either side by William Randolph Hearst’s extensive armor collection, beneath the arched roof of the main hall. Within the skylighted court itself you find Diego Rivera’s famous quartet of murals, once extremely controversial, entitled Detroit Industry. But that’s only a beginning. Other collections include:

Aside from the vast offering of visual arts, the Detroit Institute of Arts also includes the Detroit Film Theater, which regularly shows arts-related documentaries and independent narrative films. The CaféDIA provides a delicious menu and the newly-renovated Kresge Court serves as Detroit’s “cultural living room”–a space to sip a cup of coffee, read a newspaper, or simply cool your heels after a long day viewing the galleries.