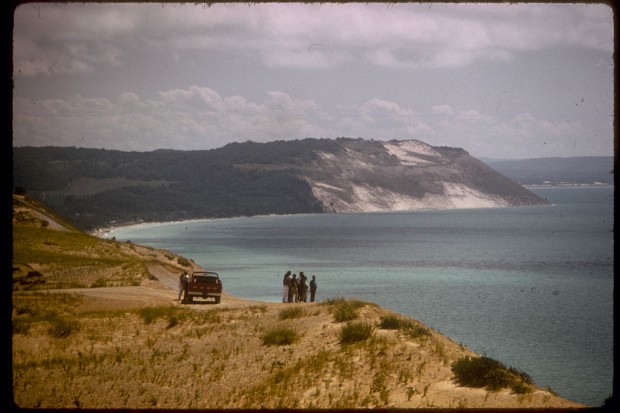 The Sleeping Bear Dunes National Park runs along 35 miles of the eastern coastline of Lake Michigan, with great beaches, dune formations, and forests. Its stunning appearance led it to Good Morning America giving it the title of “The Most Beautiful Place In America” in 2011. The park is a lovely place to go year-round, with swimming, walking the beach, hiking, camping, and picnicking during the warmer months, and snowshoeing, skiing, and snowboarding during the beautiful white winters.

A good way to begin your time at the Sleeping Bear Dunes is to drop by the Philip A. Hart Visitor Center, where there are interactive displays, brochures & maps, and a large relief map of the area! Next, stop by the Maritime Museum, and learn all about marine activity of the past. As shipping activity through the area began to pick up steam in the mid-to-late 1800s, so did shipwrecks, with 214 losing their lives on the Great Lakes during the winter of 1870 & ’71. As a result, Congress allocated funds, and formed the U.S. Life-Saving Service, an organization who’s sole purpose was to save those caught in shipwrecks. Each life-saving station was run by a station keeper or Captain, with an average of 6–8 people from the local community working under him.

In the 44 year period between the forming of the U.S. Life-Saving Service to it becoming a part of the U.S. Coast Guard, they rescued an astounding 178,000 people, with a 99% success rate in their work. With improvements in technology and radio communications, accidents on the Great Lakes became less common, and many of these life-saving stations were discontinued. Today, the station just west of Glen Haven has been converted into a museum, telling the tales of these dauntless men, great rescues, and the maritime history of the area. At 3 pm each day during the summer, there in a reenactment of a rescue drill, with Raggedy Ann & Andy as the shipwreck victims. The rescue is made with the help of the Lyle Gun, which shoots out a rescue line as much as 400 yards, to pull in crew stranded on a ship. The rescue is a great activity to bring your kids to, and they’ll be encouraged to participate.

Throughout the year there are many great events in the community, which you won’t want to miss. Click here for an up-to-date calendar.

The Sleeping Bear Dunes area has a lot of great restaurants, whether you want casual dining, fine dining, or would enjoy to be outdoors, or on the waterfront. Leelanau county also has many great places to shop, selling everything from antiques to ice cream. If you’d like to spend a day indoors, or the weather isn’t at its best, stop by a library or one of several area museums, or enjoy a movie or live music at the theater or the Traverse City Opera House.

A visit to the Sleeping Bear Dunes really ought to last more than one day. If you decide to stay, you can choose from a few campgrounds, or have a memorable stay at a bed and breakfast, or quaint hotel.

Josiah works primarily in web development and writing, and once wrote a 50,000 word (unpublished) novel in a month. He also loves to travel, and explore different cultures and locations.