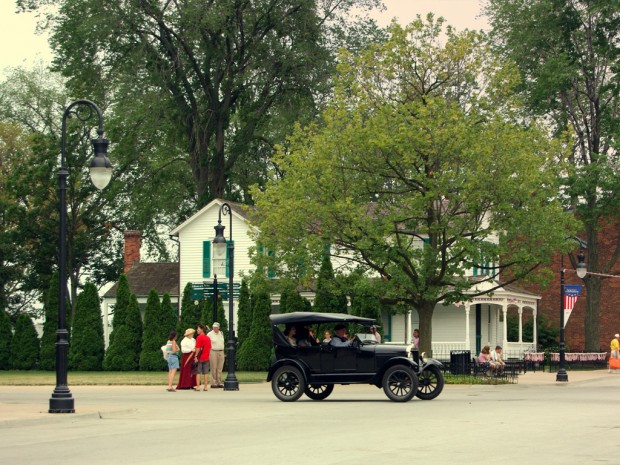 When you enter Greenfield Village, you step back in time. Back to a time when American innovation was speedily and permanently changing the world in which we live. A time when bold pioneers of science, industry, and social issues were making the world a better place. Greenfield Village is a subset of The Henry Ford Museum, and is the largest museum complex in the nation. More than a hundred buildings were moved from different places across the country, and brought here to form a historic village like none other.

Henry Ford had a passion for preserving history, and the great advancements of his day. As such, he founded Greenfield Village, to keep that part of the past alive through the ages. Many of the buildings he moved in are extremely significant parts of history, including:

Besides all of these landmark historic buildings, Greenfield Village contains many other sorts of buildings needed to make up a good village, with costumed interpreters demonstrating their craft—watch farming, glass blowing, sewing, cooking, pottery making, and so much more, and learn firsthand what life was like a hundred plus years ago.

While there is a great number of things to see there, there are also several things to do, as well: Take a ride in a horse-drawn omnibus, a Ford Model T, a steam locomotive, or a historic 1913 Herschell-Spillman Carousel!

You’re bound to spend much of the day touring the place, so stop and have something to eat at one of the great dining options, with tasty southern cooking, barbecue, or have a meal served by authentic costumed servers at the Eagle Tavern.

Every Memorial Day weekend the village hosts a Civil War reenactment, remembering and honoring those who died during that great conflict. On the weekend after Labor Day each year, Greenfield Village hosts an Old Car Festival, with more than 500 cars attending! There are many other events that happen throughout the year as well, which you can find here.

Admission to the village costs $24 for adults, and $17.50 for children 5–12. Hours vary with the seasons, but you can see an up-to-date schedule and purchase tickets here.

Josiah works primarily in web development and writing, and once wrote a 50,000 word (unpublished) novel in a month. He also loves to travel, and explore different cultures and locations.